Our lab does  "biomodeling", because it is interested in the creation of 1) experimental models using additive manufacturing technologies for the creation of tissue scaffolds and tissue engineered constructs with microstructural cues, and 2) predictive computational models of 3D tissue and cell-level mechanical effects of bioprinting cells and the effect of shear-mediated perfusion flow at a single cell. On the "biomeasurements" side, our lab is interested primarily in optical image acquisition and processing for quantitative measurement of cell morphology and tissue microarchitectures. 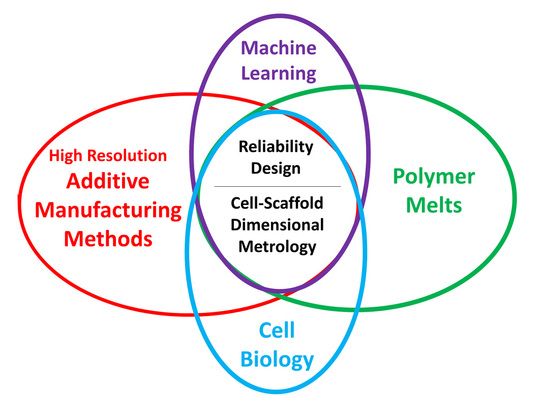 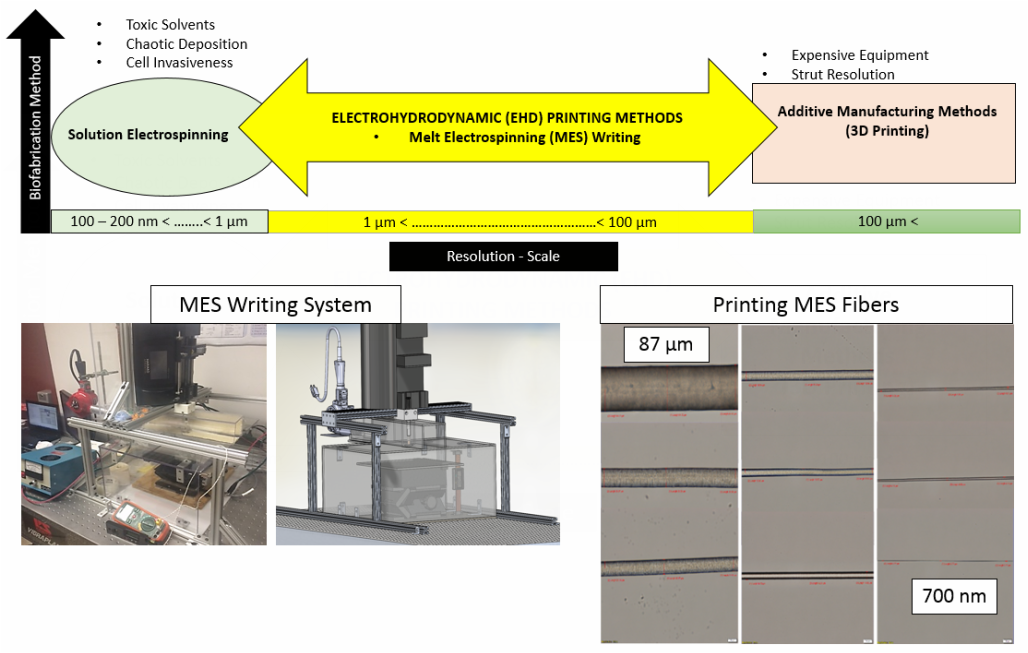 APPLICATIONS
Controlling cell behavior (e.g. stem cell differentiation) has generated immense attention in the fields of tissue engineering and regenerative medicine. Emphasis has been given to the creation of 3D biomimetic environments that replicate the complex nature of the extracellular matrix (ECM). This trend has been driven by the well-known sensitivity of cells to extrinsic signals including surface topography, substrate mechanics, and biochemical cues. A key factor that has not been systematically studied and decoupled from other variables is the substrate dimensionality or scale aspect of in vitro culture models. Thus, the main objective of this project is the process design of scaffolds with controllable structural characteristics, where the scaffold dimensionality via fiber strut diameter and pore size is selectively tuned. To this end, a melt-electrospinning setup has been designed that aims to fabricate such reproducible scaffolds, where a predictive mathematical model has guided the design based on detailed rheological studies of the polymer material.

​​Bioprinting is an emerging and promising technique for fabricating 3D cell-laden constructs for various biomedical applications. In this paper, we employed 3D bioprinted GelMA-based models to investigate the trophoblast cell invasion phenomenon, enabling studies of key placental functions. Initially, a set of optimized material and process parameters including GelMA concentration, UV crosslinking time and printing configuration were identified by systematic, parametric study.  Following this, a multiple-ring model (2D multi-ring model) was tested with the HTR-8/SVneo trophoblast cell line to measure cell movement under the influence of EGF (chemoattractant) gradients. In the multi-ring model, the cell front used as a cell invasion indicator moves at a rate of 85 ± 33 µm/day with an EGF gradient of 16 µM. However, the rate was dramatically reduced to 13 ± 5µm/day, when the multi-ring model was covered with a GelMA layer to constrain cells within the 3D environment (3D multi-ring model). Due to the geometric and the functional limitations of multi-ring model, a multi-strip model (2D multi-strip model) was developed to investigate cell movement in the presence and absence of the EGF chemoattractant. The results show that in the absence of an overlying cell-free layer of GelMA, movement of the cell front shows no significant differences between control and EGF-stimulated rates, due to the combination of migration and proliferation at high cell density (6×106 cells/ml) near the GelMA surface. When the model was covered by a layer of GelMA (3D multi-strip model) and migration was excluded, EGF-stimulated cells showed an invasion rate of 21 ± 3 µm/day compared to the rate for unstimulated cells, of 5 ± 4 µm/day. The novel features described in this report advance the use of the 3D bioprinted placental model to a practical tool for not only measurement of trophoblast invasion but also the interaction of invading cells with other tissue elements.

Numerical Investigation
Physiological tissue-on-a-chip technology is enabled by adapting microfluidics to create   a micro scale drug screening platforms that replicate the complex drug transport and reaction processes in the human liver. The ability to incorporate three-dimensional (3d) tissue models using layered fabrication approaches into devices that can be perfused with drugs offer an optimal analog of the in vivo scenario. The dynamic nature of such in vitro metabolism models demands reliable numerical tools to determine the optimum process, material, and geometric parameters for the most effective metabolic conversion of the perfused drug into the liver microenvironment.  Thus, in this project, we focus on modeling of in vitro 3d dynamic microorgan devices (DMD), where the human liver analog is replicated by 3d cell encapsulated alginate based tissue-engineered constructs. These constructs are hosted in the chamber of the DMD device serving as walls of the microfluidic array of channels through which a fluorescent drug substrate is perfused into the microfluidic printed channel walls at a specified volumetric flow rate assuring Stokes flow conditions (Re<<1).  Due to the porous nature of the hydrogel walls, a metabolized drug product is collected at the outlet port. A rigorous modeling approached aimed to capture both the macro- and micro-scale transport phenomena has been implemented. Initially, the Stokes Flow Equations (free flow regime) are solved in combination with the Brinkman Equations (porous flow regime) for the laminar velocity profile and wall shear stresses in the whole shear mediated flow regime. These equations are coupled with the Convection-Diffusion Equation to yield the drug concentration profile by incorporating appropriate reaction terms described by the Michael-Menten Kinetics model. This effectively yields a convection-diffusion–cell kinetics model (steady state and transient), where for the prescribed process and material parameters, the drug concentration profile throughout the flow channels, can be predicted. A key consideration that is addressed in our proposed modeling approach is the effect of mechanotransduction, where shear stresses on the encapsulated cells alter the functional ability of the liver cell enzymes to metabolize the drug. 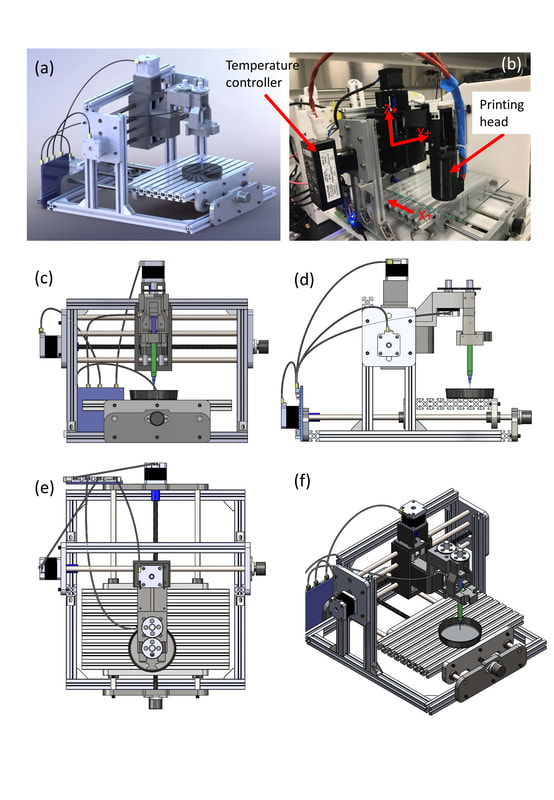 Bio-additive manufacturing methods enable the layered fabrication of temporary 3D scaffold structures, where cell morphology and function are driven by a variety of microstructural cues prescribed by the scaffold design. Specifically, bioprinting systems with robotic dispensing arms have implemented cell-laden hydrogels as “bio-ink”. However, its watery nature limits its printability, yielding cell-laden hydrogel scaffolds with non-uniform, large fiber diameters and pore dimensions (>100 μm) [1,2,3]. Therefore, the objective of this study is to develop a new methodology to improve the existing bioprinting process with respect to manufacturability and feature size resolution, with quantitation of any process-induced cell damage introduced during the process path . Specifically, in the present study, we report the manufacturing and biological consequence of cell-embedded hydrogel fiber stretching using a bioprinting system (fab@home) with fibroblast cells encapsulated in alginate hydrogel. To accomplish our objective, the printability of alginate is initially assessed with respect to its physiochemical properties, namely the material rheology and the cross-linking mechanism.